Nothing, Nope, Nada:
Emptiness is the Next Big Thing for Me 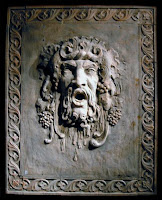 Literature in Western culture emerged out of the Greek festival of Dionysus, the god of wine and ecstasy. Plays came into existence because of the need for entertainment at these festivals, amphitheaters were built to stage the plays, and Dionysus came to be associated with creative inspiration as well as wine, which is, after all, a spirit of a sort.

When Dionysus is sculpted, his face typically looks mask-like. This is also the origin of the Druidic "green man" we see depicted in garden ornaments. This representation means something: that behind the eyes of Dionysus is emptiness, or at least, a seeming void which, if you know your science, is never truly empty in spite of how it appears.

The Mysteries of Dionysus, a religion active at the time of Christ, taught that it's only when you're empty, or "emptied out" and, therefore, open to something new, that you receive direction. So the way to creative inspiration is through giving into instinct and feeling (at least part of the time) and the apparent emptiness that often follows so that something new has a chance to come in.

It's a little like burning the prairie to destroy the invasive weeds so the wildflower seeds have a chance to get some sunlight, germinate and grow. It's also similar to what people strive to reach in various forms of Eastern meditation. The idea in Mahayana ("Great Vehicle") Buddhism is that nothing has a self, a soul or an essence. You can read this two ways: either as if no thing has a self, soul or essence, or, as if nothing-ness has a dimension or identity of its own, just like "something-ness."

The last couple weeks emptied me out pretty thoroughly as two relationships that had been meaningful to me for many years died. One hit some bumps a few months back, and I let it ride, but decided to call the person over the weekend and get her take on it. I'm glad I did. I agree with some of what she said but not all, and after thinking about it I realize we haven't had much in common for quite a while. It's hard to let go of what's familiar, but it's time to move on.

I'm not as sure what happened with the other friendship, though I could list a lot of passive-aggressive hiccups felt on this end, ebbing and flowing well over 10 years. That's not to say I'm perfect--I'm actually quite sure I've not been what she thought I should be for some time, and it was mutual. This last go-round I asked for something I thought we'd already agreed on. The answer I got back befuddled me--like she'd read a different email than the one I sent--so I asked for clarification and whether something was wrong. But I heard no more. Whether she gets over it or not is irrelevant now; I'm done. I'm ready for something new.

I had a dream several years back that gave advice relevant here. An inner voice said "Coppa di guare, god of nothing." Coppa di guare, I discovered through a little research, is Italian (which I've never studied) for "cup of healing, cure or recovery." So healing means residing in the place of nothing.

A poet I studied with once told me that it was a poet's job to do that very thing as a regular practice, and not everyone who tried to go there could make it. "Once you reach it," he added, "then you have to learn to be comfortable living there, lost and empty."

I actually find it quite easy to get lost but hard to be comfortable there. The world sidetracks me all the time. I worry about the perceptions of people I don't even know. Sometimes I don't feel all that useful because I'm not writing that much. I spent so much of my life defining myself by what I did and how much I earned that now I'm self-conscious about working at something our culture disregards because it pays little and requires much.

And I think it's oddly interesting that right now is the time this one relationship chose to break down, given that I'm producing more new work than I have in years.

The Romantic poet John Keats called this quality of emptiness negative capability and described it as "capable of being in uncertainties, mysteries, doubts, without any irritable reaching after fact and reason."

Well, okay, I'm not quite there; I have uncertainty, mystery and doubt down pat, but I still reach after fact and reason, and I'm pretty irritable about it--ask my husband.

My goal, though, if I can master it like Keats, is to take part in the life of the hawk shopping for a sparrow breakfast in the shrubs beneath the window over my desk.

Or the squirrel running back and forth between his home in the trees behind the houses across the street and my front lawn, where he buries and excavates meals day in, day out.

But it's impossible to do when people are playing mind games with you.

Sometimes I wonder if I pursue relationships that aren't good for me to give me an excuse for not working at my craft.

"A poet is the most unpoetical of any thing in existence," Keats said, "because he has no identity--he is continually in for--and filling some other body." Another poet, Mary Oliver, who writes about Keats and negative capability in A Poetry Handbook, says that this quality "is the vehicle that holds, then transfers from the page to the reader an absolutely essential quality of real feeling. Poetry cannot happen without it..."

I'm not presumptuous enough to put myself and my writing alongside either Keats or Oliver, but they are pretty good standard-bearers, and theirs is the path I try to stumble down daily. Wish me luck on my journey to nowhere, and hope that emptiness does, indeed, find me. Maybe we'll meet along the way.

Posted by Susan Clark Lawson at 6:19 PM No comments:

Make a wish as the oyster opens:
No story will come of it.

The sea is broken and
the salt water is too deep.

No one really knows how to breathe
in the bed the ocean made.

You are on your own.

PROMPT: Magnetic word tiles selected on the basis of what appealed to me that day. (I have LOTS!)
Posted by Susan Clark Lawson at 3:19 PM No comments: