My Dad: No Major Goof-up

My dad--Jack Meredith Clark Sr.--turns 91 today. In his honor, I wanted to call attention to the story of his experiences in WWII and the role played by his unit, the 474th Anti-Aircraft Artillery Automatic Weapons battalions. This group of men landed at Utah Beach in the first wave of D-Day, marched through France to Belgium and Germany, fought in the Battle of the Bulge and, eventually, served in the Army of Occupation before being discharged and returned home.

I began work on this story with dad back in 1994, the 50th anniversary of D-Day. I remembered from my childhood dad joking about his life in the Army, but as more specials came on TV to honor the anniversary of the event, he began talking about it again, but in a more factual AND emotional way. I decided to take notes.

This led to writing a letter to the one Army buddy dad had kept in contact with, Ray Bilicki. Ray has since passed on, but before he did his legacy to me was a treasure trove: a commemorative troop movement map of the 7th Corps, of which dad's unit was a part, and a privately published book about the unit, The Maverick Outfit by Frank Spaletti. I also dug out all dad's old photos from this time.

The book gave me a guideline for formally interviewing my dad about this monumental time in his life and in world history. We also went through the photos, and he told me all he could remember about who was in them and where they were taken. Then I put all the pieces together into three-ring binders for each member of our immediate family.

Through the years cousins, aunts, uncles and acquaintances have asked for copies. And five great-grandchildren have joined dad's list of offspring since then and may someday have questions. So in May 2012 I converted the book to a website, No Major Goof-up. Follow the link to read where the name came from. It will give you a chuckle over dad's sense of humor and Susan's naivete.

I've also added a permanent link to dad's blog in the sidebar of this blog, just below a listing of my other posts. I hope you'll take time to check it out. Everyone who reads it tells me it's a compelling story. And if you've ever wanted to write family history of any sort, it may give you some ideas. I put it together on Google Blogger, which is free and has a wide range of design templates available. I have a background in publication layout, so I modified a basic template to get the look I wanted. 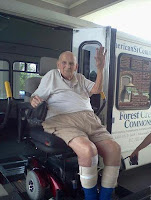 This year dad will spend his birthday in rehab, following a hospitalization for pneumonia and congestive heart failure. He navigates life from a power-chair and needs to regain some strength for everyday tasks so he can return to his assisted living apartment. Though his days now consist more of Bingo, physical therapy, stamp collecting and emergency rooms, he always has a clever comeback for anything his caregivers throw his way. And he can still beat all comers (including me!) at Checkers.

Happy birthday, dad! I'm glad you made it back from the war, and I'm glad you're still fighting the good fight!!

Posted by Susan Clark Lawson at 12:30 AM No comments: