Kindness Says It 'Once More, With Feeling'

Feelings get a bad rep in our culture. We tend to divide people into "thinking" and "feeling" camps, where the former is valued as right, reliable and appropriate and the latter is discounted as selfish, useless and out-of-place.

But I believe genuine kindness carves its path only through feeling and calls us to rethink how we view and value these parts of ourself we can't always control. 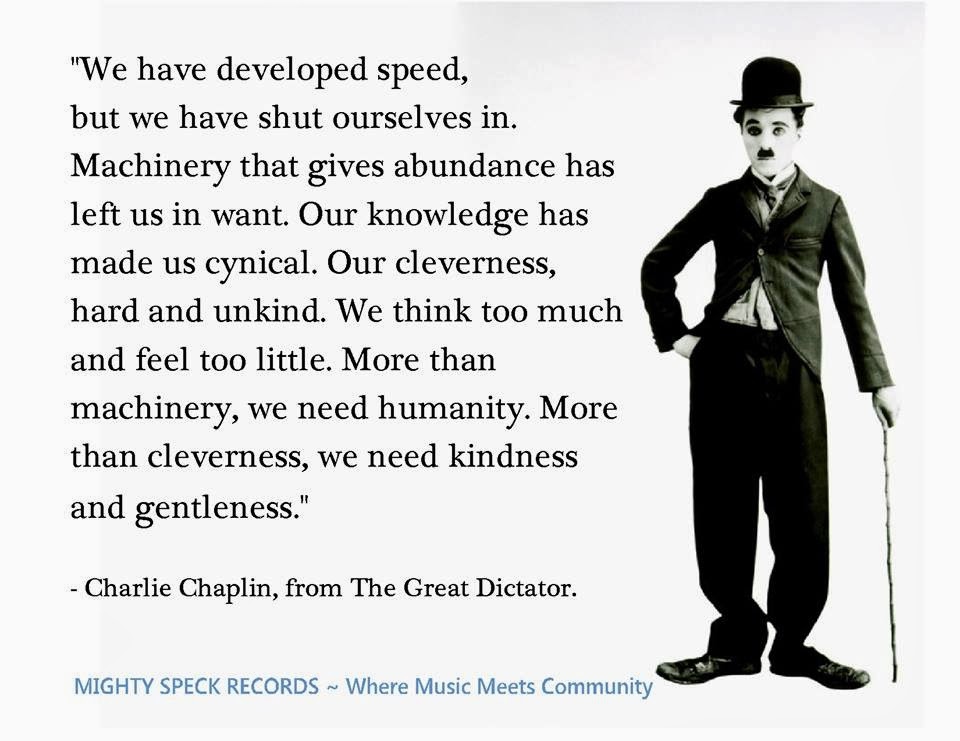 The above HIT is an excerpt from the closing speech of Charlie Chaplin's first talkie and most commercially successful film, The Great Dictator. It came out in 1940 and parodies the rise of Germany's Adolf Hitler and the Third Reich. Chaplin plays both main characters--a Jewish barber and the anti-semitic dictator of the allegorical country of Tomainia, Adenoid Hynckel. Through a comedy of errors, the two men find themselves thrust into the other's position (since they look alike), and the barber, in the end, reverses the actions of his fascist predecessor in the rousing speech of which this excerpt is a part. You can watch and listen to the full speech here and stream the full movie here.

The film is, of course, a parody, but the ending speech is nothing if not serious. Some people have called it the greatest speech ever given. I like it because it says, "We think too much and feel too little...More than cleverness, we need kindness and gentleness."

Yes, kindness, I think, begins in feeling. We cannot be kind without a strong feeling connection within ourselves.

But what exactly is feeling? It's not quite the same as emotion, though the two are related and often confused. Feeling refers more closely to sensation or information gathered in through our senses. Its etymology connects it to touch, stroke, shake and "set in motion with a push." To me, feeling is the information our bodies gather through our senses and the bodily reactions this process ignites.

Have you ever trembled with fear or had your cheeks, neck or chest flush red and warm? Perhaps you've felt the fine hair on your arms, the back of your neck or your spine tingle, only to turn and see something unexpected. I perceived a fox in this way one evening in my backyard. The fox was at least as scared as I, skid to a halt not six feet away from where I sat, and stared quizically before he took off in a wide arc fashioned to avoid me. He stopped across the street and looked back at me, as I stared at him, and we each felt, I imagine, a sense of wonder at drawing so close to the other, as well as a sense of potential danger.

Emotion, on the other hand, tends to be an outpouring of some sort--often set in motion by the push of feeling, an overload of sensory information. It is more often emotion we label as "out-of-place" rather than "feelings," though I believe we need to develop a greater tolerance of the value of emotion since it leads us in a straight line back to feeling.

Because feeling is information-based, I believe it's at least as valuable as our thinking faculties; quite probably more so. Conclusions drawn based merely on thinking may or may not have any basis in fact, in spite of what we "think," but feelings ARE facts, albeit without valuing attached. Feelings are neither "right" nor "wrong"; they simply exist. Their value is individual and discrete, of course: They are one person's bodily experience at a particular moment. The key here is to know you may feel differently at a different moment, so feelings should lead us into thought (not exactly the same as thinking) as well as, eventually, into action.

I was raised to hide my real feelings. I suppose because the emotion they generated was inconvenient or embarrassing for those around me, or perhaps my caretakers were busy suppressing feelings of their own. But what happens when you try to ignore something as basic as a feeling? It wells up all the more fervently! Let's just say for me that meant I cried easily. Still do. The only difference is I don't try to control it anymore. It's just who I am. I searched and couldn't find any attribution for this statement, but I did find lots of versions of it with lots of cute pictures. This photo looks just like my Maisie when she was a kitten, so it's the one I went with. It's important to be kind to animals, of course, but it's also important to look to their example for guidance. They are all about relying on their bodies to give them good information about their environment. It's not only how they navigate; it can determine whether they live or die. In therapy I dreamed a lot about cats--still do--because I need to be more like a cat: independent, immersed in the moment, and the hell with what other people want from me.

I admit I like being "right." I think most of us do, whatever "right" is. I have strong opinions about religion, free speech, gun control and women's reproductive rights; that is "my" right. But most of the people out there whose views oppose mine won't be swayed by intellect or skill with words.

So where does that leave the world?
HIT: 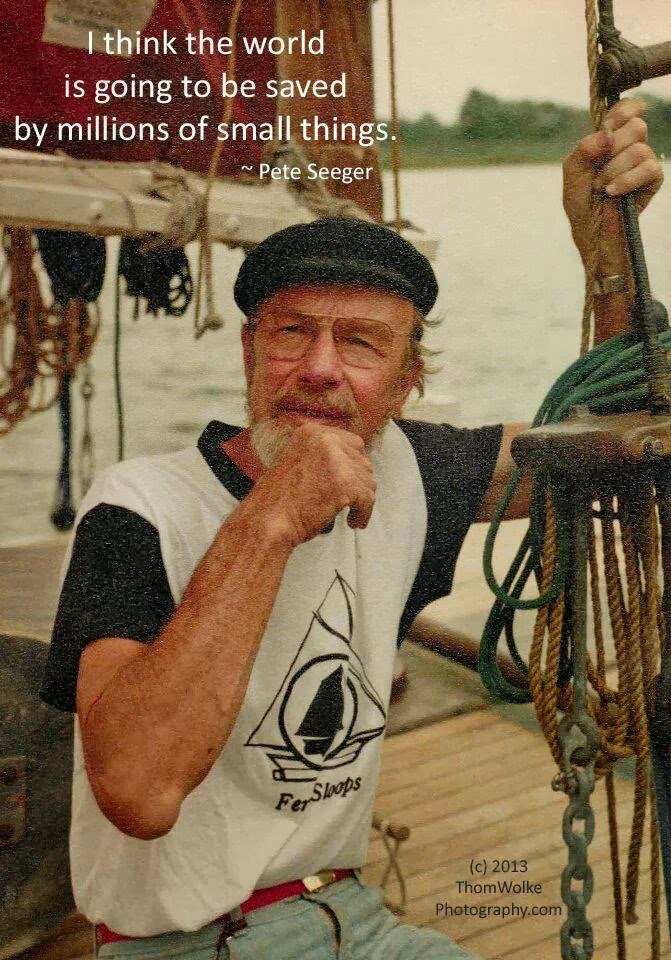 Millions of small things that begin in feeling. Kindness burrows its way through us along paths excavated by feeling. If it comes along a logical "thinking" path, and we "do" kindness like work on a merit badge or a puzzle, it's sure to backfire.

Pete knew that. May he rest in peace.

Posted by Susan Clark Lawson at 12:00 PM No comments: