Of Ducks, Daylilies, Life and Death

PROMPT: Think of something you saw recently and what it brought to mind. For a group variation, have everyone write down 1-5 images and share. Other writers can jot down the ones that appeal to them, too, and then choose from their own or someone else's to write about. The image that came to my mind is underlined and in a paragraph near the end. The rest is its back-story. Enjoy!

A mallard made a nest this spring in the corner of a flower bed that surrounds our chimney. The bed is crammed with daylilies I’ve allowed to take over because my persistence is no match for theirs. The mother duck found the one thin spot in the jumbled jungle of clumps where a pussywillow that grew too big used to grow and the stalwart daylily rhizomes have yet to bully their way into. 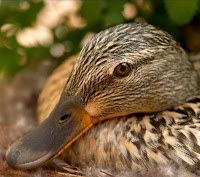 From the time my husband discovered her, this duck hen was nesting. Bits of down, shed from her underbelly to warm the eggs we assumed incubated beneath her peeked out around her like stuffing from an old pillow.

For a few weeks, every time we walked by her spot, we saw her on her nest. She appeared worn down by her task, but eyed us warily anyway. I wondered if she ever left to eat. Now that the work had begun, the male with his flashy feathers was nowhere to be found. I left a few breadcrusts close by to help her out. She never touched them.

Then one day the mother duck was gone, but there were no ducklings clacking about in a bobbing train behind her, nor did the nest contain any bits of shell as evidence of hatching. Only the circle of down remained, with the shape of her underbody pressed into it. We thought raccoons or a hawk found the eggs—maybe mama duck too? Or the neighbor’s cat or a crow? We were mystified and disappointed.

The daylilies in that bed have since begun to bloom—the yellow ones anyway, which used to be a dwarf, ever-blooming variety but seem to have bred themselves with other larger varieties that bloom for only a few weeks. The wild, orange ones—which eventually all the bed will become, I suppose, because it’s the most aggressive—have sent up their taller, gracefully bending stalks where flowers the color of sunrise will tell me  June is at home in Indiana again. Soon these blooms will be everywhere—in yards and woods, suburban banks and country ditches.
I tried to separate the wild orange ones and another tamer red variety out from the tangle of tubers when I transplanted the yellow ones here—the root stocks actually look different. And I set what I had too much of under the shade of a tree in my front yard with a “FREE” sign; all disappeared by late afternoon the same day. Some turned up soon after planted in small clumps at one of the entrances to our housing addition. Now they fill a thick, deep edge of that large bed.
All this has me wondering: How far away is life? Is it past the next death?

Each daylily flower blooms just that one day, hence the name. But the plant lives on. Several flowers come and go on each stalk, never more than one per day, each disappearing into the night until the stalk exhausts its bounty, forms its pods, turns brown and waits for me to cut it down. Then next spring it's back again.
Likewise, which moments we live through are the significant ones? In our lives, when do the leaves emerge? When does the bud form, the flower open? Is the wilt in silence and under stars somehow less because we fell into sleep and missed the precise moment of expiration?
Even cancer cells—which every body grows but only some retain—must possess in themselves a certain joy, unbridled perhaps as they culture in a corner their host refuses to turn and live consciously. I’ve read the pathology report on my own tumor. It seemed to me a sort of swirling, exotic plant, attempting to set its blooms in a closet.
How far away is death? Is it at the end of life? Or is it just the beginning?
One of my favorite movies is one I don't quite understand, but it fascinates me nonetheless: The Fountain. In it, an Aztec priest—who is either from a dream or past life or a character in a book, or all three—says, "Death is the road to awe."

The other day I looked out the kitchen window and spied a pair of mallards mating on my patio. Maybe it was the same hen who lost her eggs in my daylily bed. Maybe now she'd have another chance to be a mom this year. The drake climbed onto her back and bit her neck to hold on. She squawked and fussed and flapped. He fell off more than once in the minute or two I stood at the window and stared out. But each time, he climbed back on, and she let him grip again in his bill the back of her neck. For the first time in all the times I’d seen mallard pairs swim or fly or waddle through our neighborhood, I detected hints of lavender in the feathers along the edges of of the wings of both the flashy male and his duller mate.
How far away is life? Is it waiting outside my patio door? Lurking in a dark corner of a chimney flower bed beneath a tangle of lance-like leaves? Or shut in a neglected corner of a locked closet? Is it in my eye or my mind’s eye or my heart? As far away as what I notice or sort out or untangle? Or as close as what I ignore or abandon or give away?

Today my husband found a duck egg "planted" in the asparagus patch some 20 feet or so from the former nest site. This seeming decoy, meant perhaps to fool a potential predator, apparently went untouched while the predator stripped the nest. (A week or so later, it, too, disappeared without a trace.) I haven't any answers, you see, only questions. The poet Rainer Maria Rilke said to live the questions. I say they are all way signs on the road to awe.

Posted by Susan Clark Lawson at 11:47 AM No comments: