The 38th Signal: An Open Invite to Jason Fried 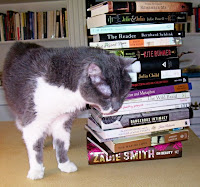 I'm more artist than entrepreneur, so my business manager (i.e., my husband) scans periodicals like the Wall Street Journal and Inc. in search of crumbs of information and insight I might want to link up with an idea from a book, poem, movie or experience and develop into a blog post.

Meanwhile, I try to slog through One Hundred Years of Solitude in time for a discussion group and gaze longingly at the unwieldy stack of other books I'd rather read (see photo at right) piling up on my work table. Chances are each one will become part of a mishap involving one of my cats (that's Katie marking them with a rub) at least twice before I get to them--IF I get to them. Some are fiction, some are nonfiction, some are poetry, and some are prose; I love them all!

I also love--okay, more accurately, really like--a lot of what entrepreneur Jason Fried says in Inc. magazine's November 2009 "The Way I Work" feature, which hubby flagged for me most recently. Fried is the 30-something co-founder of 37Signals, a Chicago-based tech firm launched in 1999. Here are some of his very cool statements:


"I don't believe in the 40-hour workweek, so we cut all that BS about being somewhere for a certain number of hours. I have no idea how many hours my employees work--I just know they get the work done."

"We rarely have meetings. I hate them. They're a huge waste of time, and they're costly...they chop your day into small bits, so you have only 20 minutes of free time here or 45 minutes there. Creative people need unstructured time to get in the zone. You can't do that in 20 minutes."

"After lunch, I get a little lazy between 1 p.m. and 3 p.m. I don't feel that productive, so I'm usually screwing around, which I think is really important."

"I like to read in the middle of the day, to give myself a break."

So far, so good. I especially like that last statement, because reading is a passion with me. But alas, my enchantment ends with the very next set of quoted words out of Fried's mouth: "I don't read fiction. I find it a waste of time. There are so many amazing things that are real; I don't need to spend any time on a made-up story."

Huh. So much for "screwing around."

I agree, there are many amazing things that are "real"; I just happen to think fiction is also one them. More than that, fiction is good for you. That said, Fried's attitude isn't unique. As a writer and writing teacher, I've heard many down-to-earth, upstanding folk say they think fiction is something untrue and they should neither read nor write it. But these views could use some reframing.

Here's how my teachers explained it to me when I studied fiction and creative writing in college: Fiction is something more true than mere fact, true in a "Yes, that feels right in my bones" way. It may or may not have been made up in whole or in part. Often it begins in something that really did happen. But then, as it becomes crafted or fashioned, it differs from an historical event. It is the story of something, rather than its history, but no less true because we touch it with our minds and our feelings instead of our fingers and our wristwatches.

"Fiction is about possible selves in possible worlds," says Keith Oatley, Ph.D., who with colleagues at the University of Toronto looks at how fiction affects people differently than nonfiction. What they found in a 2006 study was that reading fiction is associated with increased social ability and greater empathy. "Through stories," Oatley says, "selfhood can expand."

When we observe how scenarios work out for characters, we learn how we may or may not want to react if something similar happens to us. Moreover, we experience the ups and downs of what it is to be another person--even if it is a made-up character. If we can empathize with made-up characters who are different from us, maybe we'll do better with the flesh-and-blood ones we encounter.

One of the tests Oatley's team of researchers devised involved Anton Chekhov's story "The Lady with the Little Dog":


It is about Dmitri Gomov, and a lady, Anna Sergueyevna, whom he sees walking with her little dog. They are both alone, on vacation at a seaside resort. They are both married to other people, but they begin an affair. At the end of their vacation they part. But their feelings for each other grow, and both are shocked to discover how much more important these feelings are than anything else in their lives. They encounter many difficulties, and overcome some of them. The story ends with this: "...their hardest and most difficult period was only just beginning."

Researchers wrote a nonfiction version of the story as a courtroom report of divorce proceedings. It had the same characters and events, some of Chekhov's words, and was the same length and reading difficulty. Study participants reading each version scored them equally interesting, though Chekhov's version scored higher artistically.

But results showed that those who read the fiction piece had measurable changes in belief, colored by the emotions they felt while reading. "My colleagues and I believe that readers of Chekhov's story were taken out of their usual ways of being so that they could connect with something larger than themselves, beyond themselves," Oatley says. "This is an effect that goes beyond fiction. All art aspires to help us transcend ourselves."

I can't be too critical of Jason Fried. It's great in this age of multimedia distraction that he reads books at all. And what a person reads is so personal; everyone's tastes are just so incredibly different! It makes me glad for the public library system, where just about anyone can find something they'll enjoy at no cost as long as they return it on time so someone else can do the same.

The stack of books on my worktable waiting for my attention includes titles I got interested in because I found them referred to in something else I read, and I followed a trail--like breadcrumbs in a dark wood. The real thought I hope to pass along to Fried and others is not to rule out any type of literature: Try everything, then let this spill over into other aspects of life. Stepping outside our usual ways of doing and seeing is what keeps us vibrant--and creative!

Remember 100 Years of Solitude, that book of fiction by Colombian Gabriel Garcia Marquez? It's the one that at the start of this post I felt tortured by?  Well, along the way of writing this, I finished it and shared in a discussion about it with my book group. It was a tough read for me, and individuals' reactions ran a full gamut, which made talking about it all the more fun. Even though it will never make my list of favorites, the book disturbed me, and so I'm still thinking about issues it raised. One of its major themes involved the destruction caused by always and only seeing through a single lens.

I have no idea why Fried's business is called "37Signals," though it's an engaging name. I find myself thinking that maybe a reconsideration of the value of fiction could be his "Signal No. 38." Maybe, like Chekhov's Anna and Dmitri, the intensity of feeling about this "new thing" will surprise him. Because, after all, our future, like theirs, is apt to be hard and difficult at times. Best to face it all with a good story.