In the Never-Never Land of My Unfinished Novel

PROMPT: From my Nov. 6, 2011, workshop at Nora Branch of IMCPL. First we read the poem “The Mother” by Gwendolyn Brooks and talked about the idea of negative capability in writing (see a related handout under the "Resources" tab), Then I asked attendees to write about something that had presence and meaning in their lives because of its lack. Here’s what I wrote… 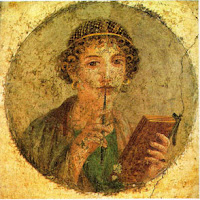 A psychic I met in grad school said she saw me with three children AND I would write three books. It took me most of the years between then and now to realize the two were the same thing: books are a writer’s children. She saw me that way, and I’ve been saying I wanted to be a novelist since the fourth grade, and yet to date, I’ve written no books, though I have managed to raise one human daughter.
I have written a great deal of nonfiction and a lot of this and that, including disparate parts of two novels. I have a vague idea for a third. My problem is I can’t seem to sustain the work—to string together the many pieces and fill in the blanks between them.  I’m not getting any younger, either. Last birthday I logged 55 years this incarnation.
Sometimes it’s life that gets in the way: helping my husband, my daughter, my dying mother, my elderly father, my difficult mother-in-law, my sick cat. Sometimes it’s internet shopping and computer games. I always have an excuse.
Each of my two novels in progress has its own mini-library of books on geographic or time settings. One novel takes place in present time in an invented town in the Finger Lakes Region of New York, while the other is set in Ancient Rome circa the reign of Caesar Augustus. The wall of my studio holds a large, framed image of my muse. It’s the reproduction of a fresco from a home in ancient Pompeii entitled “The Poetess.” The artist painted her head and shoulders in a rondelle, and she holds a book of wax tablets and a stylus, ready to make her mark on them.
Some people say she is Sappho, the famous Greek poetess from the Isle of Lesbos, but there’s no evidence of this. For one, this young woman is dressed as a well-to-do Roman. For another, she is too young to fit our idea of the middle-aged Sappho. My young woman is not far out of girlhood—perhaps 15 or 16. Her pose is a typical one used by itinerant artists and chosen by families wishing to immortalize someone, often someone who has recently died.
So into the vacuum of identity surrounding this I've projected an identity and made her the central character in my novel set in ancient Rome. I see her as someone who actually lived and whose family we know a great deal about, though we know little about her specifically. I see her as Sulpicia, the daughter of the orator Sulpicius, granddaughter of the jurist Sulpicius and niece to the general and statesman Marcus Valerius Corvinus Messalla, her mother’s brother and a contemporary of Caesar Augustus.
Sulpicia is important because her few poems are the only poems written in Latin by a woman to have survived the centuries. We know from historical sources that educated Roman women did indeed write, and fragments of writings by women in other genres do exist. Her poems survived only because someone tucked them into the final volume of poems by Tibullus, published after his death. Tibullus, one of the Latin elegists, was a friend of Sulpicia’s uncle, Messalla, a patron of the arts. Sulpicia, Tibullus and Sulpicia’s younger brother are thought by historians to have been part of the circle of writers Messalla helped support.
It's thought she wrote her poems around age 15 to 19. But all we know for sure is what’s in them: She had a great and forbidden love with someone not of her social station. After that, she simply disappears. Scholars postulate she either married and wrote no more or died. My novel is about what happened to her—in my imagination, of course. I identified with her for all time when I read these bold and insistent lines, addressed to her lover:
This day has brought a love
it would shame me to conceal—
won by song and prayer
Venus gives him to my arms
and all that she promised comes true.
Let my love be told by the loveless,
my letters go unsealed
and any read them who will.
If I sin, I glory in sinning:
I will not wear virtue’s mask—
the world shall know we have met
and are worthy, one of the other.
She lived. She loved. She wrote about it. She disappeared.
Will I do the same?
I have imagined often what it will be like to finish my days on earth and not finish my stories—never to complete what I set out to do, what I told everyone I wanted. Will someone like me, centuries from now, discover my bits and piece and imagine what connected them? What’s missing? Will she wonder what I wonder of Sulpicia? What happened to her? Where did she go? Will I speak to this future writer from my grave of paper wads and empty ink cartridges, as I believe Sulpicia speaks to me from her grave of wax tablets and papyrus?
Someone in a writing group I attended once asked when I finished reading an excerpt, “How is it that someone with your talent hasn’t already written many, many books?”
The honor she paid me touched me deeply, and my eyes clouded with tears because of how it filled me up and emptied me out all at once. The answer I gave her works for all the questions in this essay: “I don’t know,” I whispered and bowed my head. I felt shame.
I still don’t know. I feel like a failure most of the time, but I keep writing something.
A Postscript

Part of what sets apart my writing workshops is that I take the same risks I ask participants to take: I write along with them and read aloud what I wrote at least once in each session. When I finished reading this piece, again there was a hush. I let the silence ride. Eventually a woman spoke. "I thought I was the only one who felt that way," she said. Others voiced and nodded agreement.
It helps to know we're not alone on this journey. Sulpicia had the Messalla Circle. I'm glad to have all of you. Love is not the only thing it shames us to conceal.

Please enjoy this recording of Gwendolyn Brooks reading "The Mother."
Posted by Susan Clark Lawson at 4:49 PM No comments: