Cracking Open the Egg of Childhood 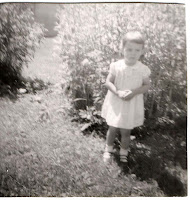 PROMPT: This essay grew from a session with my Glendale writers when that group was meeting, and it actually discusses the group's experience with the prompt, which was, What one object lost in childhood would you most like to find?

The girl spied it, not her two big brothers, or her dad, or their assistant pastor who led them on this hike along the shallow river he said drained from a glacial lake high in the Adirondacks. But it was the pastor who knew what it was she found--or sort of. He called it "dinosaur droppings."

"I didn't know dinosaurs carried things," the girl replied, curiously intent. "I wonder why he dropped it." She was 7 or 8 or 9.

"They don't, silly," one of her brothers may have said. He might have called her "stupid" if they hadn't been visiting at the pastor's campsite. "He means it's dinosaur poop," the older boy then whispered in her ear. She withdrew her hands from it, as a reflex, then extended them again slowly, as if she were touching the most delicate crystal.

Something this unusual and this lovely may have been poop once, but it sure wasn't anymore. Time had made it something else.

The rock was quite ordinary on the outside--gray and shaped like a side-wompered egg, but scaled as if it might, indeed, have come from a dinosaur. Only one broken open half remained relatively intact. Inside it, quartz crystals radiated out in white and gold, outlined in a rusty orange. Her dad carried it back to camp for her so she wouldn't lose her footing as she maneuvered along the uneven embankment.

When they got home, she found a place for the rock on a shelf in their garage because her mother didn't like outside things inside the house. Her teacher didn't mind, though, so the girl took it with her to school one Friday for show-and-tell, and the teacher said the correct name for it was a geode.

A year or two later they moved, and the girl lugged the rock along to a new shelf in a new garage. They moved a lot more after that--five houses and schools in as many years. But always the rock went along and assumed its place in the garage.

Its last stop came the summer the girl turned 13, and she found a spot for it on some built-ins next to where her dad kept the hose nozzles and partly used cans of paint. This was the house where they finally stayed, and sometimes she would go out to the garage and hold the rock, particularly when she was missing her friends in all the other places, and shift its heft from hand to hand. 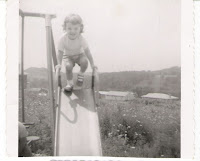 As she grew older, she returned to it less and less. When she cleaned her things out of her parents' garage for the last time to move into her own place, she noticed it, still on that same shelf. She picked it up one last time, and it fell into smaller pieces in her hands, too many bits to reassemble.

If you haven't already guessed, the girl in this story was me. I started writing this yesterday in a workshop I led. I always write along with workshop participants so they know I'm taking the same risks they are, and the prompt I gave them that drew this story out of me was, "Which long lost childhood object would you most like to find?"

People shared wondrous stories--a collection of letters written while attending school abroad, a beloved doll which the writer retained only a photo of, a child-sized chair, a set of Nancy Drew books, a ring that was too big and fell off in a yard, a house now torn down to its foundation and front steps, a friend who opted out of someone's life with no explanation.

More than one person in the group expressed fascination with all the wondrous memories of childhood this prompt evoked. I have been in other writing groups where the same thing happened, and, invariably, someone new to writing--maybe someone who only came because a writer-friend coaxed her to tag along--will express the wonder. "I don't get it," one such acquaintance said once, "I haven't thought about these things in years. Where did they come from? Why are they charged with such magic?"

Childhood, I told my group yesterday, was who you really were before life beat you up. You were pure and beautiful and full of wonder at everything. The process of growing up and living as an adult takes a lot out of us all. If we were lucky as children, we got to feel at the center of the universe long enough to give us the self-confidence we needed to propel ourselves into adulthood. But for many, by the time mid-life arrives, we need to go back to childhood and recharge.

More than one person in yesterday's group also expressed frustration about how their item disappeared:


The writer Virginia Woolf referred to experiences like this--ones that intertwined objects with emotions--as "moments of being" and wondered if...


things we have felt with great intensity have an existence independent of our minds; are in fact still in existence? And if so, will it not be possible, in time, that some device will be invented by which we can tap them? I see it--the past--as an avenue lying behind; a long ribbon of scenes, emotions. There at the end of the avenue still, are the garden and the nursery. Instead of remembering here a scene and there a sound, I shall fit a plug into the wall; and listen in to the past. I shall turn up August 1890. I feel that strong emotion must leave its trace; and it is only a question of discovering how we can get ourselves again attached to it, so that we shall be able to live our lives through from the start.

We need to harvest the energy of that unspoiled child we were to take us on into the second half of life, and writing can help us. Until someone invents something better, writing must be the plug Woolf meant.

For me, writing about my geode helped me realize it was a sort of talisman during all those years of moving around and making and losing friends in quick succession. It was a promise that something that once was waste could turn into something treasured, in time--something delicate and beautiful in the heart of something cold and hard.

It lay hatched open for me that day alongside the river before the moving began. It hatched a second time the last time I saw it, and in a way marked the next phase in my life--rediscovering the child I'd lost, letting go of the ideas I had about family for the real family I would start myself.

And it hatched again when I wrote about it yesterday and today, leaving behind these words on a page.
Writing is the plug. Childhood is the socket. Where will the energy you access take you?

Posted by Susan Clark Lawson at 2:36 PM No comments: