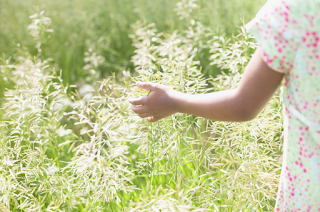 I recently tried out this multi-part prompt of my own invention while subbing for a colleague in a writing group she leads. I often try new things that don't work, so I was delighted when this one generated at least two interesting results for each participant. I'll go through the prompt step-by-step, using my own results to illustrate what can happen...


Read aloud this excerpt from the novel Written in the Ashes (Balboa Press, 2011) by K. Hollan VanZandt:


Hanna crawled into bed that night beneath a shaft of moonlight that spilled through the little rectangular window high in the wall. The day had gone as well as could be expected, and yet she felt even more imprisoned. The cold bronze collar at her throat choked her tears. This beautiful place with its kind women would never really be her home. How could it?

Home was a field without a roof, and the sound of goat bells tinkling in the afternoon as the black-faced sheep and sprightly lambs trotted across the rugged slopes, her father calling to her across the meadow. Home was a thousand stars trailing through the sky in late summer above the humped shoulders of Mount Sinai as the locusts whirred in the night.

Home was far away and never, never again.

Create a character, complete with a name, and write a narrative piece that tells us about this character without using straight description, as the writer does in the example provided. I wrote:


Home to Maggie was yellow. A kitchen painted yellow because it was the only conceivable color besides beige to pair with the turquoise countertops the house came with. Home was the frantic search with her mother for just the right print that combined the two colors for the kitchen curtains. It was the smell of muslin, mercerized cotton thread and wet wool in her nostrils—her mother's smells—and a bench with a lid that lifted up to reveal a bounty of scraps Maggie would cut and wrap and tie with ribbons onto her dolls.

Home was yellow pads of ledger paper her dad brought home from the office for her to draw on. It was the warm glow inside when he called her "my little Margie," like the TV heroine.

Home was yellow fireflies blinking in the summer night as she dashed after them with her emptied-and-washed-clean mayonnaise jar. "Good job, Mags," her oldest brother would call out after she trapped one. "I bet I can get more than you, Naggie," her middle brother would tease.

Home was also the "yell-o" from her mother that began with "Now Margaret Elizabeth..." not to run with glass in her hands. She'd slow her pace until mom looked away and drink in the yellow smell of the just-cut grass, as the steam set to rise from it in the early summer morning lay in waiting like welling tears beneath the snipped blades.

When Maggie moved here, to her own house, with her own family, she painted all the walls yellow, pale yellow—candleglow, the paint chip said—but it still didn't feel like home.

Outside, the grass had yet to germinate. And in the morning before the workers began pounding on the other houses in progress, the air was still and empty—no birdsong, no squirrels or chipmunks, no neighbor kids on swings or bikes. At mid-day, to stand on her new back porch was to feel as if she'd landed in the middle of a desert where all the houses looked the same on the outside and none with turquoise countertops inside, she bet.

Some teenager even bounced a basketball up her front sidewalk, rang the bell and asked why her house was so different from the others. So different to the other homesteaders, yet still not home to her.

Go through your narrative piece and underline about a dozen phrases or sentences that you feel call forth the strongest imagery. If the passage contains two or three images, count them individually. Write these selections on a separate sheet of paper, and skip lines between each. You may edit out small words or names that interrupt the image. I chose:

Now cut apart the lines and rearrange to create an abstract poem. Create four-line stanzas, and in each new stanza reuse one or two lines from a previous stanza and add in two or three lines of new material. Write at least four stanzas, and make sure all the repeated lines stay the same. Here’s what I came up with, though it’s far from a finished piece:

The yellow smell of just-cut grass
waiting like welling tears
beneath snipped blades.
Yellow pads of ledger paper to draw on

beneath snipped blades,
the air still and empty,
the steam set to rise.
The yellow smell of just-cut grass,

the frantic search for just the right print,
a bounty of scraps to cut and wrap and tie,
fireflies blinking at dusk.
She dashed after them

with her emptied-and-washed-clean jar
the smell of muslin and wet wool in her nostrils—
her mother’s smell—a bounty of scraps
to cut and wrap and tie.

Outside the grass had yet to germinate,
a desert where all the houses looked the same:
yellow pads of ledger paper to draw on.
Candleglow, the paint chip said.

Follow the link to read about the poetic form called a pantoum, which involves an intricate pattern of repetition, and to read a modern-day example of a (broken) pantoum, "On Beauty" by Nick Laird, which also inspired the novel On Beauty by Laird’s wife, Zadie Smith.

As you rework your piece, does it call out to be structured as a pantoum? Which did you like better—the narrative or poetic version? What were the good points of each? The group I shared this prompt with thought their poem versions concentrated the images and told essentially the same stories as the narratives, but in a more emotion-packed way. At the least, it’s a lesson in approaching the same material from different angles.

Feel free to play with your results from this prompt over and over. Rearrange, add stanzas or choose different lines from the narrative. You can also use the image/poem part of the exercise with a prose piece you’ve already written. If you like what you come up with and want to share, email it to me and I'll post on the Your Words section of my website.