Face to face with a fox 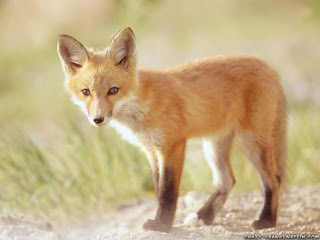 I wrote about my face-to-face encounter with a fox in my suburban back yard for the first time several years back in a writers' group that met in my home.

It was just a few days after I heard one of my favorite poets, Mary Oliver, speak at Clowes Hall through the Butler University Visiting Writers Series. Oliver often writes about nature, and hearing her inspired me to try to write about my fox.


Since then, I've written about this encounter on several different occasions, always trying to "get it right" and figure out what he meant for me, in much the same way the poet Lucille Clifton did in her poems about fox sightings. Her fox was female; I felt sure mine was male. Don't ask me why, but at the time I felt as if he came for me, to show me something, though I didn't know what. He was beautiful enough to write about in and of himself without making him into a metaphor, but I never gave up on the idea to do so.

I hadn't thought about that fox in a while but woke up today with the thought that he meant grief. I laid in bed awake for a half-hour while this new version spun itself inside my head before I decided to get up earlier than I'd wanted to and write it down. The poem seemed to want little punctuation, so I tried to construct it in the manner of W. S. Merwin, whose perfected lines make punctuation superfluous in showing the reader how the poem should be read.

Anyway, here's what I came up with...


...who bounds toward me so silently
across the intersections of
sleepy suburban backyards that

the down on the back of my neck pricks up and
whispy arm hairs snap to rigid attention as if to shout
turn your head and I do.

...who skids to a halt where grass meets gravel garden path
where my body waits in shoshin and locks eyes
with something dark and wild and other.

then stops across the street
and waits
and watches while

presses hands over heart
as if to capture the gift of
its pounding.

My experience this morning also called to mind a poem by Ted Hughes entitled The Thought-Fox, assigned reading in a long-ago graduate class. The professor contended that Hughes' "thought-fox" was just as real as a flesh-and-blood fox, and that in writing about it Hughes gave it a distinct life. That's what I wanted to do with my fox. Hughes got the idea for his poem from a dream. (Listen to him discuss the dream and read his poem here.)

I think I've come close this time to conveying what my fox meant, though I have a ways to go before I can give Hughes, Merwin, Clifton or Oliver a run for their poetic money.

Jot down a few of your own "up close and personal" encounters with nature and/or wildlife. Go ahead and write about them, whether or not you think you already know their "inside" meanings. But pull the experience out of your writer's bag of tricks again and again and see if time gifts you with new insight.