Below the surface, beneath the snow 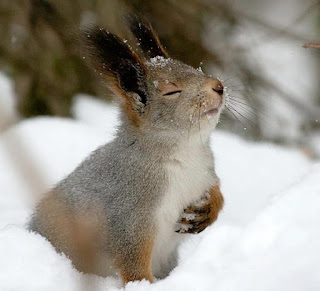 Once upon a time in spring, down on my knees, yanking weeds, I found a perfect rabbit skeleton sprawled on the rock edging of my garden.

I almost missed seeing it, hidden as it was by the low-hanging boughs of an eastern white pine tree.

I guessed the rabbit sought shelter there during a winter storm and drifted into its forever sleep protected by the curtain of soft needles and a hedge of drifting snow. My husband and I had seen other animals do as much during wind and snow and pelting rain--squirrels, birds, raccoons, even possums.

I thought about this discovery again on this wintry day when I saw this photo by ALWARDii Photography. It brought back the sense of wonder I felt that particular spring day, that I could be so intent at as mundane a task as pulling weeds and stumble upon evidence of a life lived. That I could be tearing out something that spoiled my idea of nature--my garden--only to come across Nature herself, in all her raw beauty and mysterious terror.

Days like that one--discoveries like that--are why gardeners garden, I think. It's good to be reminded of what's real about nature and what we just invent. Not that gardens or invention are wrong--certainly not! But friendly reminders of how life and death continue on with or without our conscious participation are something I think gardeners are on the lookout for.

I know I am. Not to mention that the endless digging and pulling and planting gives a person time to sink into a slim, silent moment.

I remember how the rabbit's jaw was open--as if in a scream, I thought at first. But maybe the mouth opened as a reflex to collect one last taste of this world.

I searched my garden bench until I found a long, flat container, then I placed the skeleton in the same arrangement I'd found it on the rocks. Later I cleaned the bones. Then later in the summer I buried them in the tomato patch, something I thought the rabbit would appreciate, food for the journey into the next life.

More than once I'd found a plump, over-ripe tomato with a bite out of it, often on the ground, but now and then still on the vine. I never minded much because I always planted more than I needed so I could share. Perhaps it was my tomatoes that rabbit opened its mouth wide to taste one last time before it dozed off into the sleep that melted its fur, long ears and fluffy tail into pale outlines on the stone.

A light blanket of snow dusts the ground this bitter cold day outside my home in central Indiana. Tomorrow, the blanket is expected to thicken. This photo reminds me that so much goes on beneath the surface, and I should always remember to look for it. That I should never forget to open my mouth wide and be ready to bite into each moment as if my last.

PROMPT: What does the photo call to your mind? Of what experience of nature or of an animal does it remind you?
Posted by Susan Clark Lawson at 12:57 PM 2 comments: