Of Sugar and Snow 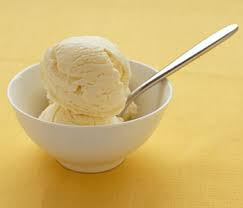 PROMPT: Write about your associations with a particular food. Here's what I came up with...

Ice cream scoops and churns its cold, creamy sweetness through memories of my family as we grew up together.

“I want to ride with Uncle Jack,” my cousin Beth said on a trip our families took together to Cooperstown and the Baseball Hall of Fame, “because whenever you stop at an ice cream stand along the way, Uncle Jack buys you the big cone.” Beth’s mother was only a year behind her brother, my dad, in school, but when it came to ice cream they were an ice age apart.
We had an ice cream snack from a grocery store carton nearly every night growing up. And then wasn’t like now with all the gourmet brands and exotic flavors. Mostly it was vanilla, chocolate or fudge ripple. And it tasted of the freezer’s dull breath before we ate the carton empty, but that never kept us from scraping out every last layer and smear.

I remember...
I remember rides in the country to find farmers’ dairies where they made their own, and dad chattering about how he cranked it for my mom’s dad when they made it down on the farm in Dayton, Pennsylvania. They had to eat the whole freezer-full up in one sitting because the only refrigeration was a spring house. Some problem to have, huh?

I remember how dad always had change for Klondikes all around when we stopped in Joe Roebel’s store for a pound of chipped ham and a loaf of bread and how he was the only dad on the block who’d spot all the kids for a drumstick or a fudge bar or a Bomb when the ice cream truck ambled past our house in Rolling Hills, near Irwin, Pennsylvania.
I remember trips to the shopping center in Pittsford, New York, where dad bought each of us one of those slabs of Neapolitan ice cream stuffed between two waffley cream crackers, like a sandwich. I remember trips in my jammies to the Elmira, New York, Dairy Queen and my first chocolate sundae with Spanish peanuts I wanted because they sounded exotic but loved for the combination of salt and crunch mixed up with the sweet and cold.
Jewels, jobs and journeys

When my parents decided to invest in a piece of family jewelry, they chose a brooch shaped like a crown. I was the one who came up with the idea for arranging the birthstones: two each for mom, dad, each of my two brothers and myself, which translated to four rubies, four amethysts and two pale blue topaz. Whenever mom wore that crown pinned on her shoulder I thought “Dairy Queen” and my mouth would water and long for creamy coolness.

Not surprising, then, that my first job was at a Dairy Queen in Southport, Indiana. I remember practicing my curls at the ice cream machine when we weren’t busy and cutting the undulations of soft-serve off at the cone lip into a bucket the owner would recycle into more soft-serve. I learned how to make ice cream into Dilly Bars and Buster Bars, Blizzards and sundaes and Brownie Delights.

I also remember going to the Dairy Queen with a neighbor whose daughter was my best friend. He let us order not just the biggest cone, but anything we wanted. I had my first banana split in the back seat of his Thunderbird, with the top down on a hot summer night, and I couldn’t finish it. He was a doctor, a cardiologist, and it was banana splits all around—for me, his daughter Gail, her brother Steven, and his friend Pete. Except for Doc. He got a Dilly Bar. Every time he ever took us, Doc got a Dilly Bar, along with a bag of Dilly Bars in a take-home sack. I thought about this years later, every time I made the Dilly Bars at my part-time job.

When I began to question some of my childhood experiences that were more about cold than sweet, I dreamed I was trapped against a deserted Dairy Queen stand at the edge of a park. I climbed up onto the service counter and huddled against the shut and locked window. A vicious dog barked and snapped at my feet.

I don’t eat ice cream so much anymore—too fattening, too habit-forming, too charged with comfort and with sorrow. But when I do, I sculpt away the melting edges like an artist working in soft clay, and I let the spoon linger in my mouth until all the creaminess has given up the metal and sunk into my tongue. I never stopped loving it.
Ice cream and end times
In the last couple weeks my mom was alive, I tried to entice her to eat by bringing her whatever she wanted. Included in the food order was always a vanilla Frosty from Wendy's. Eventually, she left the solid food untouched, and the Frosty was the only thing that tempted her. When she could no longer feed herself, I spooned the Frosty into her mouth. She had trouble talking, but she managed to get me to understand she wanted bigger spoonfuls. The last couple days, she wasn't allowed anything for fear she'd aspirate it. She seemed hungry, thirsty. It was difficult to see her that way and not be able to do anything about it.
These days, since mom's passing, I sometimes eat lunch or dinner with my dad in the dining room at the assisted living place where he still has an apartment. He always asks for and they always bring him a scoop of ice cream for dessert; usually he asks for butter pecan. And I watch back through the years as the bowl empties, when it empties. Sometimes now he only takes a few bites and leaves the rest to turn to mush, a thing he'd never have done years before. His look is far away. We both miss mom.
My life has been filled with so much coldness and so much sweetness. What to make of both? Like chocolate and vanilla, each sharpens my taste of the other. Maybe the only answer left is to share dad's scoop with him. We'll do it for mom, who always hated to see anything go to waste. Wish she could join us for one last bite.
Posted by Susan Clark Lawson at 8:54 AM 1 comment: