Kindness According to Hits and Misses

A Google search of "kindness quotes" yields more than 7.5 million results. Only a few are true "hits" because they illuminate the concept of kindness in a new or different way.

Others seem like true hits at first, but then register as "misses" when you think them through. My hope is that as we circle round and round the idea of kindness in the coming weeks, what it truly is and is not will begin to emerge.

With that in mind, here are the "hits" and "misses" of my Google search to date...

I like that Twain describes kindness as a language, which tells me two things: 1.) It can be learned, and 2.) it has its roots in instinctual behavior and could once again become something we learn so well that its practice is automatic. We know that people who lose one sense--perhaps vision or hearing--experience a strengthening of other senses. Also, the portion of the human brain used to produce language is, in other animals, given over to instinctual processes. That’s not to say we don’t have any instincts since we developed language. We do, but they aren’t as sharply honed as in other animals because our brains are busy doing other stuff, like writing blogs and performing brain surgery.


Which brings me to another
HIT: 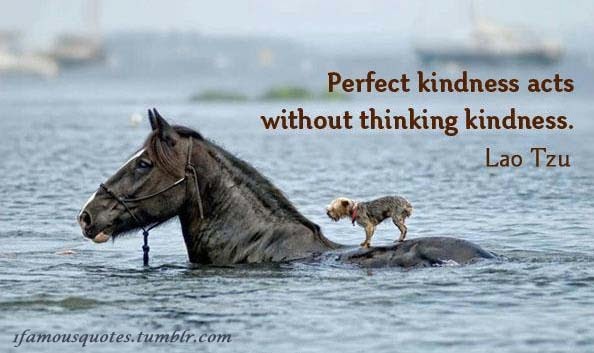 We can, of course, learn to tune into our instincts better and use that knowledge that comes up through our bodily sensations to inform our behavior, including our language-based responses. Though don’t expect your fellow humans to let you get away with behavior you’d tolerate in your cat (like tearing a mouse up for dinner). 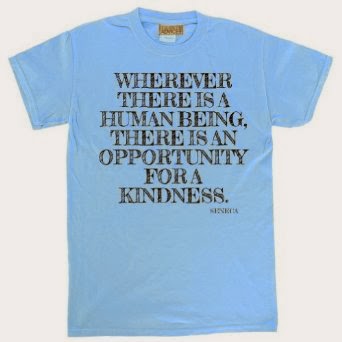 While this is true, it doesn't go far enough. It assumes kindness is just for us homo sapiens, who are often the unkindest members of the animal kingdom, to each other and to other animals. Other animals do seem to have a natural instinct toward kindness when it's required. Reference all the stories of one breed of animal caring for another's babies, and revisit the photo above of the little dog on the horse's back as it swims to safety. These behaviors are a sort of instinctual kindness, and my guess is the animals don't think twice about it, which is proof in my book that they deserve at least as much kindness from us humans as we would show each other; actually, more. Reference all those other stories about serial killers who started out killing neighborhood pets.

That brings me to one that’s
HIT & MISS: 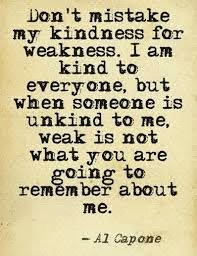 When I saw the attribution on this one, it made me laugh. Like Capone, I don’t think we should let ourselves be doormats. I'm not very good at the doormat thing, though I don't maintain a squad of thugs to take out anyone who crosses me (but it's an interesting thought, wink-wink). There are socially acceptable, legal, and even KIND ways of making a stand, though we don't always sort them out in time to put them to use. At least I don't.

I think the answer lies somewhere along the lines laid out in the Bible's book of Proverbs, chapter 15: “A gentle answer turns away wrath, but a harsh word stirs up anger...The soothing tongue is a tree of life, but the perverse tongue crushes the spirit.” People learn what they experience, and life has already versed me well in the language of the harsh word and the perverse tongue. I’m still working on the soothing language that is a tree of life. I tend to be direct. Sometimes that comes across as abrupt. Sometimes it IS abrupt.

Like I said, I'm working on it, so I see in what Capone says a classic human dilemma. To use tree of life language AND not get trampled by others is really tough, but it’s where the rubber of kindness meets the road of life. Maybe I'm an idealist, but I do believe both are simultaneous possibilities, which is why my focus on kindness this year. I know I want to do both, to find that middle pathway of seasoned response. Such concentration and consciousness it will take though!


And finally, another
MISS: 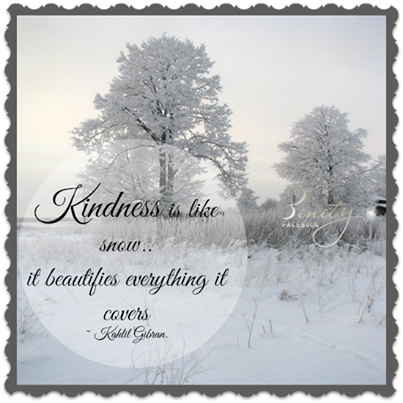 I personally like this one because I love the beauty of snow and winter; I just don't think anybody experiencing winter in the Midwest U.S. this year will buy it. And to be honest, I think the metaphor fails because kindness isn't cold and it can't be a mere cover; it's something that has to go the whole way through, if you get my drift (yes, I love puns!).

I have more "hits & misses," but that's probably enough for this post.

If you have stories about times you’ve straddled this great divide successfully or fallen by one or the other wayside, please have the courage to share in the comments section and help us all grow. If you don't agree, please feel free to voice your opinion. But explain WHY and be kind, okay?
Posted by Susan Clark Lawson at 12:00 PM No comments: