Consider yourself warned: Life lived by the inspiration of greeting cards (Internet or the old-fashioned printed kind) and aphorisms is headed for a train wreck.

You just can’t trust the folks who make up all those cards and screensavers to reproduce the quote accurately or in context. And the pictures they choose--puppies, babies, seashores and the like--are only meant to suck you in rather than add meaning to the electronically super-imposed words.

“Ay-yi-yi!”  as Lucy might say to Ethel, with a hard smack to her own forehead and a jaw dangling in disgust. A few small words can make a HUGE difference. See if you agree... 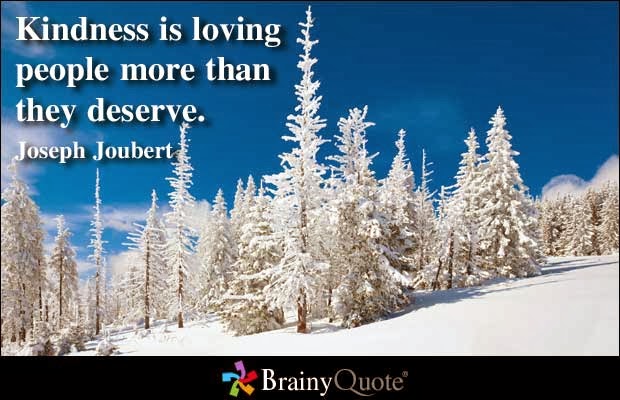 When I first found this quote, some Internet hack had sliced off the opening words "A part of," which completely altered the context--as if ANYONE could say they knew the whole of kindness!!--and super-imposed it over a crystalline snow scene, whatever that was supposed to add to the meaning. In that condition, this quote infuriated me. Who was this Joubert character anyway?

Turns out he was a teacher who wrote essays and short, pithy statements like the one above--aphorisms. In the 21st century he probably would have made a fortune promulgating e-cards as long as he found better pictures to accompany them than ones of himself. But in 19th century France it took his widow cajoling a younger and more famous friend, the writer and diplomat Francois Rene de Chateaubriand (yes, the same one who gave his name to a particular preparation of beef tenderloin) to edit his sayings into a book.

Wikipedia describes Joubert as a "moralist," which may explain his pinched face in this etching. I was all set to dislike him for that reason alone until I read a few of his other sayings I really like, such as:

"To teach is to learn twice."
"When you go in search of honey you must expect to be stung by bees."
"All gardeners live in beautiful places because they make them so."

I think I know what Joubert is trying to say in his kindness quote. At a time when people are doing the most unappealing sorts of things, true kindness overlooks that. To be treated with kindness will perhaps help them through their misery and make for a better outcome. I agree with this, though it doesn't work out 100 percent of the time (remember, kindness is a crapshoot). After all, it's easy to reciprocate when someone's being nice. The less "deserving" someone behaves likely means they are in greater need of true kindness.

What makes me wince in this quote is the idea that love is or isn't deserved. There's a whole group in society who will tell you humans as a race are basically wicked and don't deserve love or forgiveness or anything good. They usually will add something like, "but God loves them anyway." While it isn't difficult to find evidence of humanity's wickedness, I think this is a skewed way of looking at life. And when we move into a specific discussion of kindness, deserving or not deserving distorts the discussion even more.

Doesn't every living thing on this earth deserve love? Doesn't the whole of creation deserve our respect and honor? Don't most of the world's ills go back to a deficit of love? I know the kind of behavior and person Joubert is referring to here; heck, once or twice I've BEEN that kind of person. But doesn't lack of love contribute more than anything to bitterness and unkindness? I think it's dangerous and just plain not helpful to get into discussions of what others do and don't deserve; better to dwell on that other aphorism--"There but for the grace of God go I."

What really saves this quote this quote (in its correct form) is it ties kindness to idea of love, because I can't think of a better synonym. Even the Bible says "love is kind" in that famous passage in I Corinthians 13. Maybe you remember it being read at your wedding, but religious or not, Christian or not, it's a good passage to reread now and again.

Kindness is also love, an important quality to give and to receive. I think Jo-Jo would agree. It might even put a smile on that sour puss of his.